That's a tough pill to swallow - especially for the world's central bankers who continue to aggressively employ QE strategies in hopes of economic growth.

U.S. Federal Reserve Chairman Ben Bernanke staked his whole chairmanship on the supposed efficacy of QE in spurring an economic recovery. In fact, he was so convinced he deployed three rounds of it. That added $2.5 trillion to the Fed's balance sheet.

Then there's Japan, which is now in the grips of recession. Despite an ill-fated QE program between 2001 and 2006 that didn't work, the Bank of Japan is starting to more aggressively pursue this tactic.

QE hasn't happened yet in Europe. But European Central Bank president Mario Draghi has made it clear that QE is now a matter of when, not if.

But the world's central bankers continue to operate on a false premise. Namely, that money printing in itself sparks inflation.

Central bankers' main goal is to combat deflation and spur economic growth. Specifically, foreign central banks want to arrest the deflation crisis that has plagued Japan for 20 years, and reverse a dangerous disinflationary trend in Europe before it becomes the next Japan.

They think QE will trigger inflation. QE aims to flood the banking system with money and push down interest rates so borrowing is more attractive. This will supposedly revive an ailing economy.

The problem is the Fed-induced cash infusion is just sitting on bank balance sheets.

You see, inflation is "too many dollars chasing too few goods." The key word is "chasing" - the QE dollars aren't chasing anything. There's low velocity of money.

The Federal Reserve's attempts with QE are a perfect example.

"You can print all the money you want, but if people are not borrowing it, if they're not spending it, then your economy is collapsing, even with money printing," CIA economist Jim Rickards told Money Morning earlier this year. "The Fed doesn't know what they're doing."

Richard Koo is an economist at the Nomura Research Institute. He has referred to the problems facing world economies as "balance sheet recessions."

In the current economy, businesses and consumers are paying down debt. And appropriately so. The financial crisis that slammed so many of them was largely precipitated by an overextension of credit and large debt loads.

That's why flooding the banking system with money as QE does won't work. Even at low interest rates, and with the monetary base growing so much, consumers and businesses don't want to borrow. 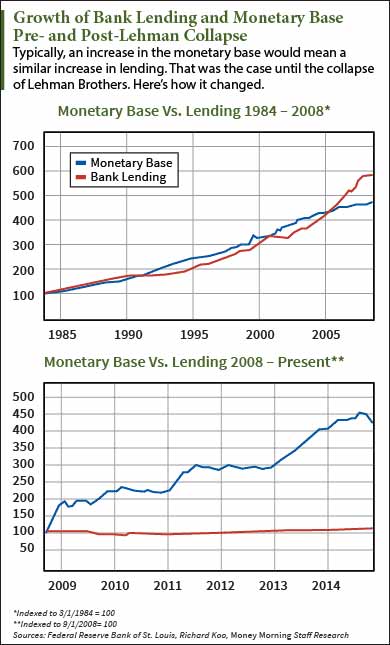 That leaves the banking system awash with unborrowed savings.

This can all be seen in a comparison of the money supply, the monetary base, and private lending.

Editor's Note: The U.S. economy is setting up for a 25-year Great Depression, and the Fed hasn't been of much help with its QE push. CIA economist Jim Rickards tells you how you can weather this coming economic storm here...

The accompanying chart shows this. The monetary base has far outstripped private lending. This is what happens in the deleveraging of a balance sheet recession. And money printing isn't the remedy in these extraordinary times.

This is why inflation won't suddenly happen overnight in Japan and the Eurozone.

Surely the yen will fall and so will the euro. It's already happening.

But that's because of investor sentiment. Investors expect inflation, and are shorting the currency in droves. This doesn't mean inflation is taking hold.

How to Invest in a QE-Crazy Environment