A strong U.S. dollar explains why silver prices are down 1.5% this past week. 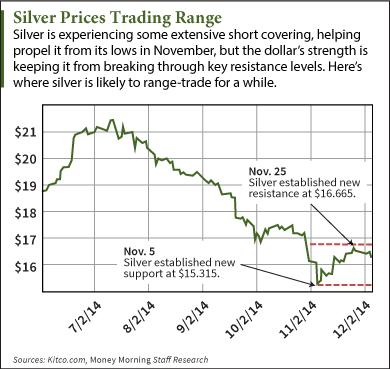 Investors move out of precious metal investments and back to more traditional assets as the dollar rises.

The U.S. dollar has gained strength as massive money printing around the globe has hit foreign currencies – specifically the euro and the yen.

The Bank of Japan announced Oct. 31 it will up annual bond-buying by 10 trillion yen ($82.8 billion). And while European Central Bank President Mario Draghi hasn't confirmed an ECB quantitative easing to reverse Eurozone disinflation, the calls for it are louder. Sooner or later, Draghi will give in and QE will become a reality in Europe as well.

Now there's a lot of downward pressure on the euro and the yen as short sellers look to profit off these currencies' downfalls. This pushes up the dollar even more.

The strong U.S. dollar is now silver's biggest headwind. This comes just as bearish sentiment has retreated a bit in the futures market…

At the moment it looks as if bearish sentiment is waning, but the dollar's strength has kept silver from making the big speculator-induced gains silver saw this summer. Silver rose almost 14% from summer lows when short sellers exited the market en masse from early June to mid-July.

This hasn't happened in this latest round of short covering.

LOL epic fail article title…week just started and silver is up.. Deluded much?

I know right? I read silver market/price news every day often twice a day and they all have the same success rate in their predictions as my trusty ol' dice. PM Market writers are akin to sportscasters imo. We all watch the same action then they say "See that?! So did I, here's what might happen next!" Actually I want the sucker to dip to 14 again so I can spend some more of this TP they say is worth a lot lately.