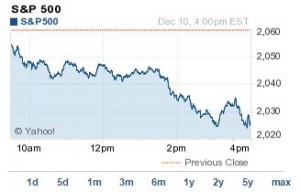 What Moved the Markets Today: The markets slumped on renewed global concerns about oversupply in the oil markets. Energy Information Administration crude inventories registered higher than analysts expected this morning, with 1.5 million new barrels added to U.S. storage last week. Analysts at Bank of America Corp. (NYSE: BAC) said today that the political infrastructure of OPEC could soon collapse, oil will fall to $50 per barrel, and weak producers will be shaken out of the international market. The energy sector is the worst-performing component of the S&P 500 on the year, falling more than 15%. However, the decline could serve as a $1 trillion stimulus for Americans who have endured years of high gasoline prices at the pump. Some energy economists are projecting that a gallon of gasoline could fall below $2 in states along the Gulf of Mexico that are proximate to refineries and impose lower energy taxes.