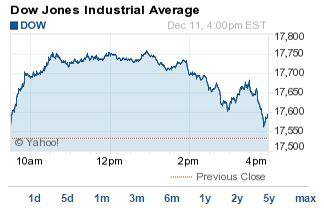 The Dow Jones broke its three-day slump Thursday, posting a gain of 63 points. The markets jumped on strong employment and retail sales data.

The S&P 500 Volatility Index (VIX), the market's fear gauge, dropped 8.36% on the day. The index had soared more than 50% in the last three trading sessions.

What Moved the Markets Today: The markets jumped on positive employment and retailer data. Jobless claims slipped to a three-week low of 294,000 Americans this morning, lower than the four-week moving average. In addition, retail sales for November hit their highest growth level in eight months.

The optimism was muted by a continued slide in the energy sector. The price of West Texas Intermediate crude slipped below $60 today, a break-even benchmark for many shale producers across the nation. This is the first time crude has been at this level since July 2009, four months after a near-total collapse of global trade.

[Extra: This chart shows which OPEC countries are reeling from the oil price slump...]