Oil is the foundation of OPEC countries' economies. Their budgets feel a tremendous strain when crude oil prices fall as dramatically as they have. 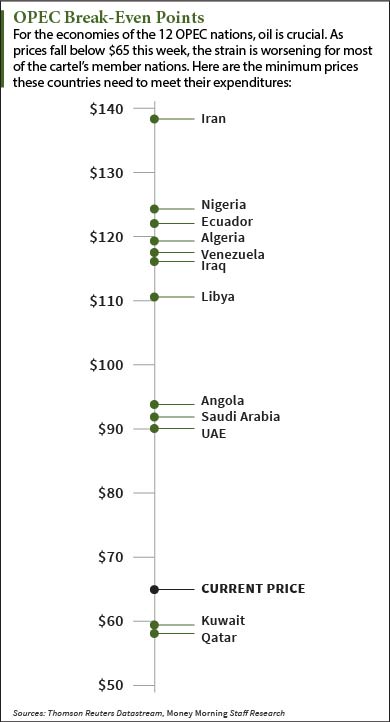 Brent oil for January delivery traded at $64.59 at noon today (Thursday). That's a drop of more than 41% from the $110 mark Brent hit in June. Yesterday was also the first time the global benchmark dipped below the $65 mark since 2009.

This oil chart shows the OPEC break-even points - the minimum prices different countries need in order to meet their expenditures.

Iran needs the highest oil price of the 12 OPEC nations, at $136 per barrel. But Iran isn't the only country in trouble right now. Only Kuwait and Qatar have break-even points lower than today's crude oil price.

Oil prices dipped even further this month after OPEC announced it would be maintaining its 30 million barrel-per-day production level. Several nations, including Venezuela and Nigeria, have called for lower production levels. The cartel's biggest member, Saudi Arabia, has refused.

The Saudis don't want to lose global market share and are willing to let prices fall. Saudi Arabia can withstand low prices because it has the largest foreign-exchange reserves of any OPEC nation. Its $750 billion in cash reserves ranks third globally.

A report from Bank of America Corp. (NYSE: BAC) this week says OPEC has lost all competence in failing to stabilize prices. As prices continue lower, the governments Venezuela and Nigeria will struggle to survive.

The United States government is not dependent on oil exports like many Middle Eastern countries, so falling oil prices are not a major crisis stateside. Many large oil stocks have been impacted by the falling price of oil, however.

Get the Best Oil Price Analysis - for Free: Money Morning Global Energy Strategist Dr. Kent Moors has been meeting with some of the world's top oil policymakers in Dubai this month to analyze OPEC's controversial new strategy. OPEC has refused to cut oil production, and in doing so has started an oil price war with U.S. shale producers. But the OPEC oil price war simply won't work, says Moors. Here's his exclusive inside look at the oil market...

"The United States government is not dependent on oil exports like many Middle Eastern countries, so falling oil prices are not a major crisis stateside."

No, but as Dr. Moors has written, the price of recovery of US oil is not cheap. Deferring to him, I recall, he cites the US production price as something equivalent to the UAE. So that, at current prices, it does not pay to produce the US oil. Production will lag, and the eventual shortage of cheap oil will carry a steep price.

And while the US GOVERNMENT may not be dependent on oil exports, the US ECONOMY certainly runs on oil.

The steep drop is one of the best opportunities the US should exploit. The drop is due to what I believe a confluence of several issues.
1. Dollar Strength. We can see the dollar rising in value as many of the pairs decline. The 10 year yield is being squeezed. Money is leaving other countries for the US market. All of the mentioned pieces drive the value of the dollar up and put downward pressure on the price of oil.

2. The global economy is trash. Europe, the largest economy can't get out of their conservative straight jacket. Tying Draghi's hands on QE is killing their economy. They need to loosen their monetary policy so they can push for better growth. The euro market economic issues is causing a flight to safety that pushes money toward US investments. China is much slower than before, their shadow banking issues is creating problems in their economy, and the central government has overspent their stimulus for the last 10 years.

3. Global supply/ Demand. There is lower demand because of the economic issues outside of the US market. The supply problem is moderate because we are only talking about oversupply in Brent. The US still has a restriction on exporting Hydrocarbons. If congress were to open the flood gates we would see the price decline initially as the world soaks up the excess and crude finds equilibrium between supply/demand/price.

I am not sure why there is so much worry about lower crude. The US economy is based on Cheap energy. It's a gift from the Saudis and Iranians that will put the economy into high gear. We should thank those people.

Here is the most important part. If we can get congress to pass the hydrocarbon bill that removes the restriction, we might get to a trade surplus on BOP. A trade surplus would allow us to pay down some or all of our debt obligations without the need for JAT (just another Tax). Write your congressman today to tell them to pass the Hydrocarbon export bill!!!

** I am not affiliated with any hydrocarbon producer, exploration, or any part of the industry except as an independent investor…

A good comment but you are missing the most important reason why money is flowing into the U.S. The crisis in Ukraine. The Saudis have almost doubled their output of oil compared to last year. They have done this, not solely because they want to capture or retain market share, but because they are trying to hurt Russia as a punishment for invading Ukraine. Russia invaded Ukraine for two reasons: 1. Ukraine was not renewing the lease for the naval base in Sevastopol and Russia would no longer have a base on the Black Sea. 2. There are newly found huge reserves of oil and gas in Crimea and Eastern Ukraine. Russia could not allow Ukraine to develop those reserves because it would mean that Ukraine would then no longer be a customer of Russia for oil and gas, and, Ukraine would be able to compete with Russia for the oil and gas business of Europe. Last week Russia floated a bond issue and had to withdraw it because they could not sell it at a low rate. The offers were in the 11-12% range. The sanctions by the West are hurting Russia big-time. and the low oil price is making Russia's position even more painful. I believe that when Russia starts to pull out of Ukraine, which will only happen when the Russian people get pissed off with the current situation and with Putin, then we will see the Saudis lower production and that will be the time to go all-in in the oil patch investments.