There's more OPEC news today (Monday) after the 12-nation cartel announced again that it will not be cutting production in the face of falling oil prices.

According to Money Morning's Global Energy Strategist Dr. Kent Moors, these actions will spell the end of the 12-nation oil cartel. You see, OPEC is fighting a battle it simply can't win. 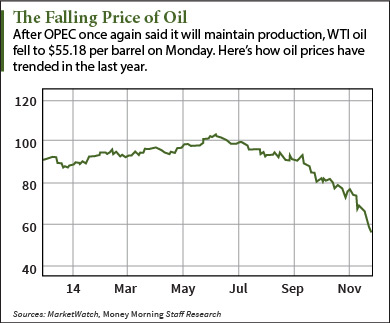 Brent crude traded near $60 per barrel. That's down from more than $110 in June.

Last week, the cartel received another blow when a Bank of America Corp. (NYSE: BAC) report stated that the oil cartel "no longer exists in any meaningful sense." The Dec. 9 statement claimed that OPEC had effectively dissolved after failing to prevent low oil prices.

But once again, Moors was ahead of Wall Street. He spent the early part of December meeting with the world's top oil policymakers in Dubai, and had an inside look at OPEC's strategy.

On Dec. 5 he told his readers that the cartel's days were numbered.

Since then, WTI crude oil has fallen another $10 and the cartel's outlook is even bleaker.

Here are the three reasons why OPEC will collapse, according to Moors...

The Three Reasons OPEC Will Dissolve

opec cartels hanging on thin life support on more than many reasons to support these downward spiral trend: 1. shale oil production in canada and state of dakota oil production will more than offset market price by its stable and within major oil consumption markets; 2. less distance to transport and mainly land distribution; 3. it takes the cartels average $60 minimum to break even, except saudia arabia; 4. more reliable hybrid fuel saver and all electric vehicles taking more market shares, mean less petro needed; 5. newer hydrogen powerplant will put knock out punch for many fossil fuel; last and not least, coal gasification technology will be next abundant coal supply in many poorer countries. i believe German used this method in WWII.

Well, I am confused about the position taken by said Dr. Moors and Bank of America! Based on what I heard, there are reasons that OPEC took this position with respect to the price of oil! One is that the Bakken oil field on average needs to be able to sell the oil for $80/barrel to remain profitable. Also, the current pipeline running through Syria is another item that OPEC wants to change too, and the best way to do it is to lower the price of oil. However, Russia is on the opposite side with their pipeline which presents some factors. Essentially, the real result is an interest in putting in a new pipeline all together; hence, the motivation to keep the price low. How is it that someone speaking on behalf of Bank of America said that the workings of this Cartel are essentially limited? With the data I've got, there is no way that this cartel is dead. The Cartel is using the price of the oil for new purposes.

Its nice to see oil prices heading back to NORMAL levels as they should drop after raping the people for 6+ yrs of artificial high prices, in those 6+ yrs we have been ramping up production , getting ahead of the oil game finally and are even closer to oil independence. Currently our #1 Export is Gasoline ! Yes Gasoline ! So that tells you we are not hurting for OIL by any means are with more and more fuel efficient vehicles and even more dollar stretched people using less, more poor people then ever, which the last 2 are not good reasons by any means, but are the US reasons for using less OIL then ever, it will be in decline as long as we produce more and use less, we have other alternatives, but must implement them slowly as to not kill our economic oil line and all that goes with it. Just a FYI that peak OIL was BS as per usual, The USA alone has enough OIL to supply ourselves and maybe part of the world for over 2000 yrs ! So this OIL game is HUGE and it's all about the Money people, all about the money, and the oil barrons/cartel will say and do whatever they have to , to keep themselves wealthy and you poor, no matter what…They buy the Media, the Governments, the scientist and whomever they must to keep feeding the world Misinformation…good luck out there and try to prosper…