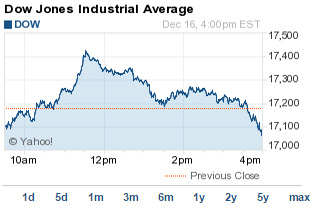 DJIA Today, Dec. 16, 2014: The Dow Jones Industrial Average dropped 109 points Tuesday in yet another volatile trading session of triple-digit swings. The markets erased triple-digit gains from earlier in the session, while economic deterioration in Russia accelerated.

What Moved the Markets Today: Oil prices were mixed today. WTI crude prices were flat, remaining just below $56 per barrel. Meanwhile, Brent crude dipped more than 2% and temporarily fell below $59 per barrel for the first time in more than five years. New-home construction in the United States jumped above one million homes for the annualized rate last month. However, housing starts slipped by 1.6% and building permits fell by 5.2% in November. Both figures are critical forward indicators of future construction.

Here's a breakdown of today's other top market stories and stock performances: