Today's Fed meeting gave the Dow Jones Industrial Average a boost. The blue-chip benchmark jumped 288 points on news the Federal Reserve plans to be patient with its timeline for raising interest rates. The markets were also fueled by a surge in energy stocks, which received a slight bump from rising oil prices and strong data from the Energy Information Administration. 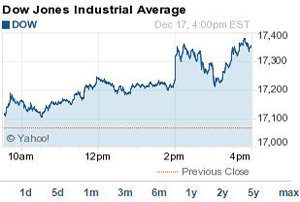 What Moved the Markets Today: U.S. stocks soared Wednesday afternoon when Federal Reserve Chairwoman Janet Yellen said the central bank plans to be patient with its possible interest rate hike in 2015. In a statement, the central bank dropped the language stating it would be a "considerable time" before the Fed engaged in a rate hike and replaced it with a suggestion that it will be "patient" when it comes to tightening policy in 2015. Here's a breakdown of the three most important things to know about today's Fed statement.