The Bitcoin forecast for 2015 includes major strides toward the promise we've heard about for more than a year.

"The Bitcoin industry is moving faster than any one person can fully comprehend," said Money Morning Defense & Tech Specialist Michael Robinson. "I believe 2015 will mark a turning point in the brief history of this fast-growing virtual currency."

Look at how far Bitcoin has come in just five years. Created in 2009, only a handful of techies were aware of it for the first two years it existed. 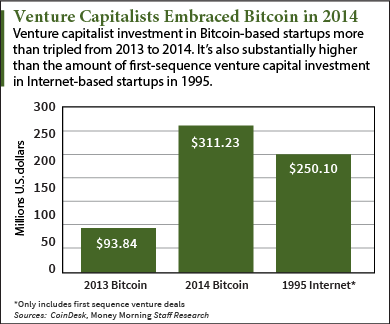 The number of Bitcoin wallets, which people use to send and receive bitcoins, is expected to rise from just over 3 million at the end of 2013 to about 8 million by the end of 2014.

This is just the start for Bitcoin's growth as a phenomenon. Just as the Internet gradually became a vital part of our lives over a period of years, the world won't fully realize Bitcoin's true impact for a long time - as in a decade or more.

Of course, there will be some hiccups along the way...

The implosion of what was the world's biggest Bitcoin exchange, Mt. Gox, gave Bitcoin a black eye this year from which it still hasn't fully recovered.

But the power of the idea - a decentralized, digital currency that includes ownership data and can move money around the world in an instant - just keeps gaining traction.

The best part of the 2015 Bitcoin forecast is that next year will bring a new stage in Bitcoin's development.  For sure, mass adoption will continue. But next year we'll see a lot more activity on Wall Street as well as a lot more innovation from Bitcoin startups.

Here are the four most important and profitable factors that will make 2015 a pivotal year for Bitcoin...

So i don't really care if goes up or down :)