I sure hope you didn't lose faith this year in Ambarella stock (Nasdaq: AMBA).

The stock sold off shortly after I recommended it on Jan. 7, but I advised you folks to stick with this winning, fast-moving leader in video-processing technology. Those who did endured a tough patch when the stock declined by roughly 30% from early January to early May.

But staying the course proved highly profitable - Ambarella stock went on to gain roughly 53% so far this year.

Today, I want to show you the five reasons why the stock has had such a great run.

But that's just a start - today, I'll also show you how, if we stick with it, Ambarella will double again from here...

If ever there was a tech firm that meets all of the criteria of my five-part Tech Wealth Secrets system, it's Ambarella.

Simply stated, this is one of the best semiconductor firms around. Its huge returns illustrate how a well-run niche player can leave the rest of the stock market in the dust.

Now then, when many investors see gains of 200% in less than 18 months, they may fear the run is over for a tech stock like Ambarella. 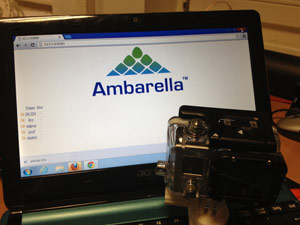 They're wrong. AMBA stock could still double again from here because of the strength it shows in each of the five rules I use for building wealth through tech stocks.

Ambarella has this base covered. CEO Fermi Wang is a star among tech leaders. Wang holds several patents in his field and has a long track record of success.

Consider that he earlier cofounded Afara Websystems, a pioneer of advanced computer servers that is now a division of Oracle Corp. (Nasdaq: ORCL).

And he's gotten a lot of help over the years from Les Kohn, a renowned chip expert Wang began working with nearly 20 years ago. They started out at C-Cube Microsystems, a pioneer in video-compression technology.

Wang has surrounded himself with other impressive executives. As a group, they have logged stints at such chip leaders at Intel Corp. (Nasdaq: INTC), National Semiconductor Corp. and NXP Semiconductors NV (Nasdaq: NXPI).

On to the next reason AMBA stock is set to double - again...