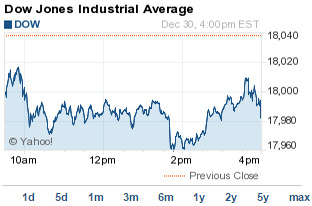 The Dow Jones today dropped more than 55 points on a day of light trading volumes. Concerns about falling oil prices remained central to the energy sector, while utilities were the biggest decliners of the day. Last-minute profit taking continues to be a priority as the trading year winds down.

What Moved the Markets Today: The Dow Jones slid as investors continue to take profits ahead of the New Year and new geopolitical concerns emerge across Europe. The markets slipped despite consumer confidence beating consensus expectations for December. Meanwhile, single-family housing prices slowed less than expected in October, according to the Case-Shiller Housing Index. Gold prices saw a modest 1.4% gain today, fueled by speculation over the future of the Greek economy. Gold's gain pushed mining stocks higher. Shares of Newport Mining Corp. (NYSE: NEM) rose 3.6% on the day.