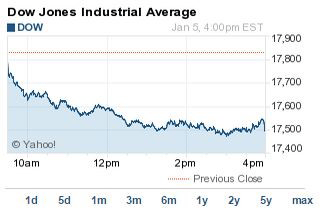 What Moved the Markets Today: The energy sector dropped nearly 4% this afternoon as falling energy prices continue to weigh down the broader market. U.S. crude prices slipped below $50 per barrel for the first time since April 2009 on the tail end of the global trade collapse. In contrast, this downturn has been fueled by oversupply of oil in the global markets. In addition, ongoing economic concerns in Europe, with an emphasis on Greece, have signaled that traders do not expect global demand to remain high in 2015. Oil prices have now fallen by roughly 55% since June, when Brent crude traded above $117 a barrel and WTI above $107. U.S. energy producers saw the biggest hit on the day, with Laredo Petroleum Inc. (NYSE: LPI), Baytex Energy Corp. (USA) (NYSE: BTE), and EP Energy Corp. (NYSE: EPE) all falling more than 12.5% today.

[Editor's Note: Here are the best oil stocks to buy now that prices are low...]