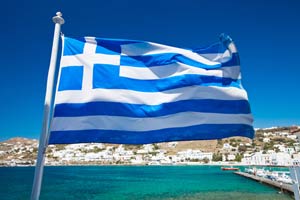 Good Morning! Dow Jones futures today (Tuesday) forecast a dip of seven points from yesterday's close. On Monday, the Dow Jones Industrial Average slumped 331 points, a 2% loss. The dip, and the prospect of a 5% correction in 2015 leaves Money Morning's Chief Investment Strategist Keith Fitz-Gerald unfazed. Yesterday, he told Fox Business that winter weather could play a big factor in the markets in the coming weeks. He also offered four stocks that you must avoid should a continued downturn occur.

What to Watch Today: Investors will continue to monitor the situation in Greece, where an anti-austerity, leftist bloc is gaining traction. They could secure power in the event of a snap election. The possibility has rattled the European markets, and German Chancellor Angela Merkel has publicly stated that she's prepared for Greece to exit the Euro. In addition, investors will keep an eye on several data reports this morning in the United States, including November factory orders at 10 a.m.

Here's what else you should know about the Dow Jones today – including your "Money Morning Tip of the Day" – to make it a profitable Tuesday:

Money Morning Tip of the Day: 2015 oil prices won't change the emerging U.S. dominance. After dictating the course of oil prices for more than 50 years, OPEC is finding its influence diminished. OPEC's oil ministers can read the writing on the wall as well as anyone. Not only are they about to lose the largest energy market in the world, but they'll soon be competing for the markets that used to be theirs for the taking. Because in 2015 the United States will start pulling the strings. Here's how you can profit off this major shift next year…
Join the conversation. Click here to jump to comments…