The Dow Jones suffered another triple-digit plunge Tuesday, extending Monday's massive slump as oil prices continue to fall and concern of global oversupply stings traders. The downturn was fueled by comments from Saudi Arabia's King Abdullah, who said this morning the kingdom will not slash production and will keep output high to protect market share.

The S&P 500 Index fell for the fifth consecutive trading session. 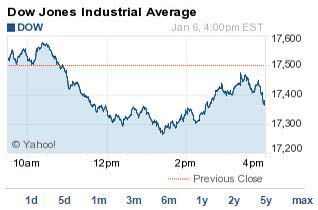 What Moved the Markets Today: The energy sector slumped another 1.4% on the day as crude prices fell further. February West Texas Intermediate futures slipped to their lowest levels since April 2009, finishing the day at $48.12 per barrel. Meanwhile, Brent crude, the global benchmark priced in London, slid nearly 3.7% on the day to finish at $51.15 per barrel.

[Editor's Note: This investing tactic can help you beat the market by almost 22% in 2015…]

18476 Reads
These 3 High-Yield REITs Pay 8%, 10%, and 12% Dividends
REITs produce gobs of cash from rent and other fees generated from properties including office buildings, storage units, multifamily units, and more.