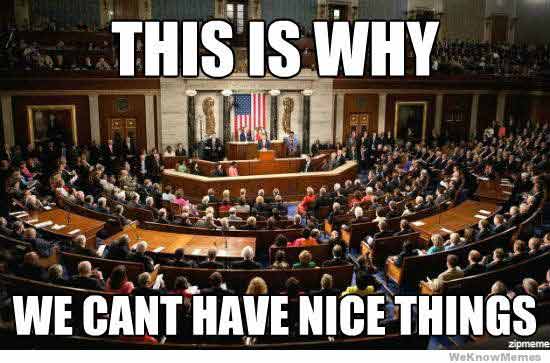 Congress quotes: Nearly all members of Congress raked in salaries of $174,000 per year (not including outside contributions) since 2009, according to a Dec. 30, 2014 report from Congressional Research Service.

But according to popular opinion, these folks don't deserve six-digit compensation…

One reason for such high disapproval of our nation's lawmakers: the things they say…

Here's a look at ten of the most infuriating, baffling, and even amusing quotes by congresspeople that have made America sour on the legislative body…

(Did we miss any of your favorite Congress quotes? Join the conversation @MoneyMorning on Twitter and share more… )

From Rags to Riches: Amazon.com founder and CEO Jeff Bezos was born to 19-year-old Jackie Bezos in New Mexico in 1964. He spent his childhood summers doing farm work at his grandparents' ranch in Texas. Today, Jeff is worth more than $30 billion. Check out five more rags-to-riches American CEO stories here…

Not sure why number 9 is baffling. Bachmann is absolutely right. Plants need CO2 to live. Without it, plants die and, before long, so do we. How can something vital to life be a pollutant?

Try walking into a room with no O2, just CO2, and someone closes and locks the door behind you. How long are you going to live? CO2 in higher than NORMAL levels can be quite deadly!

The absence of binary oxygen, not the presence of carbon dioxide is what would do you in. Carbon dioxide is a trace gas – it's not toxic and humans wouldn't be affected by ten times the concentration, although plants would grow better. 80% of the atmosphere is nitrogen – that isn't toxic, either – but a room with nothing else in it would kill you.

Are you talking in nature or a gas chamber? It does make a difference.
Bachmann probably has no clue, just like the other members of congress.
Not just co2, but anything that is not about raising money for themselves.