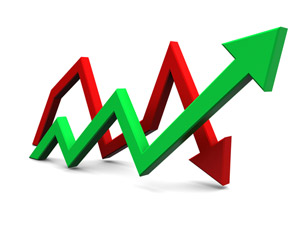 Dow futures for Wednesday, Jan. 7, forecasted a 130-point gain over Tuesday's close. Yesterday, the markets dropped more than 130 points, continuing a broad sell-off fueled by slumping oil prices and growing geopolitical concerns about Europe. On Tuesday, the Euro hit a nine-year low against the dollar.

Today, investors will continue to monitor crude oil prices, which continue to slide to lows not seen since mid-2009. Investors will also keep an eye on the Federal Reserve, which will release the minutes from its December FOMC meeting, the final one of 2014. Language in the minutes could suggest when the central bank plans to hike interest rates in 2015 and its plans to respond to ongoing economic problems in Europe, China, and Japan. Finally, pay attention to the December jobs report from Automatic Data Processing (ADP), the nation's largest jobs processing firm. Consensus expectations for new jobs is 235,000 for the month. The Bureau of Labor Statistics will report the official December jobs report on Friday.

Money Morning Tip of the Day: Modern medicine, for all of its sophisticated drugs, complex gadgets, and amazing surgical procedures, rarely cures anything. It treats. It manages. It postpones the inevitable. But return a patient to normal, optimal health? Rarely… So when an innovation comes along that can effect a complete and permanent remission of disease or restore damaged organs to a pristine state, it should cause your keenest investing instincts to perk up and pay attention…
Join the conversation. Click here to jump to comments…