Dow Jones Today, Jan. 7, 2015: The Dow Jones rallied triple digits Wednesday and the S&P 500 returned to the black after five straight losing sessions. The combination of rising oil prices and additional guidance from the Federal Reserve on its rate hike timing fueled a positive day for the markets. 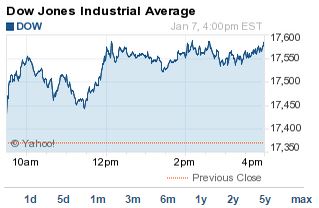 Automatic Data Processing (ADP) reported this morning that private employers added 241,000 jobs in the United States in December, surpassing consensus expectations of 226,000. On Friday, the Bureau of Labor Statistics will release the December U.S. jobs report.

What Moved the Markets Today: The central bank released minutes this afternoon from December's FOMC meeting. According to the report, most Fed officials agreed that their forward guidance on policy means the bank is unlikely to increase interest rates by late April. Many Fed members remain concerned that inflation is too low for a 2015 interest rate hike. U.S. stocks rallied the most in three weeks on improved optimism over the general economy and oil prices reversing course. This afternoon, West Texas Intermediate oil prices jumped 1.4% to hit $48.60 per barrel.

Here's a breakdown of the top stories from the stock market today: