Best oil ETFs to buy: Crude oil prices have dropped to their lowest level since 2009. Brent oil is near $50 a barrel this month, after it hit $115 a barrel in June. WTI oil has fallen below $47 a barrel in January. 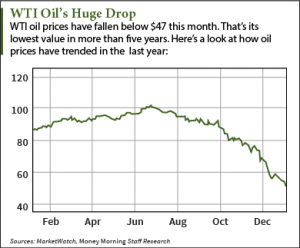 "As the most fluid commodity in the world, crude oil has the ability to quickly self-correct. That's why longtime oil veterans aren't worried about falling prices," Moors said. "In fact, the vast majority of them (including myself) actually expect oil prices to climb in 2015."

One of the biggest rebound signs is the increase in U.S. and global oil demand.

"I think we're about to go into a golden period not unlike the 1940s and 1950s when energy prices to GDP were similar and we had rapid growth and a rapid appreciation in equity prices," former Chief Executive Officer of Gulf Oil Joe Petrowski said on Squawk Box last month. "You're just starting see the benefit on the consumers' wallet."

Chasing profits from the future turnaround in oil prices can be expensive and risky for investors. But there is a safer way to play this trend, with oil ETFs.

But not all oil ETFs are alike.

Almost two dozen funds trade on American and Canadian stock exchanges. However, many of them are too risky because they are volatile, new, or thinly traded.

That's not the case with these four oil ETFs.

These have enough daily volume to allow easy entry and exit points. Three track the oil price while one taps into profits from fracking and other "unconventional oil" plays.

And because the price of oil is near a bottom, these ETFs trade at a huge discount now. Take a look...

Is there a leverage ETF that it tied to Brent Oil?