The hottest initial public offering (IPO) of 2015 could likely come from a company you haven't yet heard of...

Xiaomi Corp. is a Chinese tech company founded in 2010. By the end of this year, talk of a Xiaomi IPO will reach a fever pitch. The company has made incredible progress in its brief existence.

Xiaomi launched its first smartphone in 2011. By the third quarter of 2014, Xiaomi became the third-largest smartphone vendor in the world. It beat out such veterans as LG Electronics Inc. and Lenovo Group Ltd. (OTCMKTS ADR: LNVGY).

The company's astonishing growth is why so many expect a Xiaomi Corp. IPO within the year. 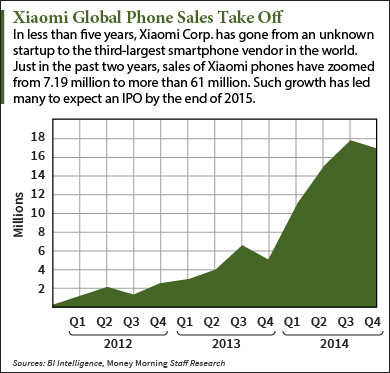 Xiaomi Chief Executive Officer Lei Jun announced last weekend that 2014 revenue had more than doubled from the previous year, from $5.2 billion to $11.97 billion. That was up some 150% from 2012 revenue of $2 billion.

That's why venture capitalists are investing in Xiaomi with abandon...

The company raised more than $1 billion last month in its latest round of funding. Xiaomi Corp. is now valued at $45 billion. That puts it ahead of Uber Technologies Inc. ($41 billion) and Airbnb Inc. ($10 billion).

Russian billionaire Yuri Milner, who invested in Facebook Inc. (Nasdaq: FB) back in 2009, thinks Xiaomi's valuation could hit $100 billion. Milner's DST Global has been investing in Xiaomi since 2012.

"I was attracted by the size of the opportunity ahead of them," Milner told Bloomberg last month. "I don't think there's any company that has reached $1 billion in revenue as fast as Xiaomi. In every conceivable benchmark, it's almost unprecedented in terms of its speed of growth."

While it has made no formal IPO announcement, the South China Morning Post reported in November that the company is studying its options. And the success of the Alibaba Group Holding Ltd. (NYSE: BABA) IPO last September could not have escaped the notice of Xiaomi brass.

Given the company's crazy growth and the rising investor interest in Chinese companies, a Xiaomi IPO is a sure thing.

As with Alibaba, a Xiaomi IPO would offer a great opportunity for investors. The impressive numbers only tell half the Xiaomi story.

Here's why it stands out from the crowd of up-and-coming Chinese tech companies...