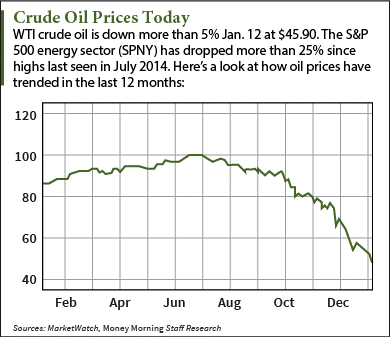 The current price of oil per barrel today (Monday) showed no sign of breaking its downward spiral. Late Monday morning, both benchmarks hit new six-year lows. WTI oil prices dipped as much as 5.1% to $45.90 a barrel. Brent oil prices were even more volatile, dropping 5.9% to $47.18 a barrel.

The Truth About Oil in 2015: Oil hovers below $50 a barrel, but there are two major reasons why it will rebound this year. These factors are why the most experienced oil industry veterans aren't worried about low oil...

Goldman analysts wrote the current price of oil per barrel has to remain low if investment in shale can be reduced to restore balance to the global market.

"The price forecast cuts by both Goldman and Societe Generale reinforce the fears that have driven us down to these levels," Gene McGillian, a senior analyst at Tradition Energy told Bloomberg. "We're hunting for a bottom, but it's anyone's guess where that will be."

"As the most fluid commodity in the world, crude has the ability to quickly self-correct," said Moors in our oil price outlook for 2015. He said oil is near a bottom and will head up again in 2015.

This is the seventh consecutive week in which the current price of oil per barrel has dropped. Companies concerned that the slump will continue are starting to cut back on drilling. OPEC countries have stated since November that they won't cut production no matter how far prices fall.

But OPEC's stubborn strategy is doomed to fail.

According to Moors, OPEC's decision to maintain production levels is "the opening salvo of a global oil war." Although the cartel's current price cut is impacting the market right now, there's no way it will last long. And investors can profit no matter what OPEC does. Go here for the full details of oil prices in 2015.

I doubt they are trying to help us by telling us that prediction.

So I'm thinking they are trying to make us panic and dump our oil and other stocks (banks, pipelines, etc.). Meanwhile, they are secretly buying stocks that we dumped at ridiculously low prices.