The CBOE Volatility Index (VIX), the market's fear gauge, was up more than 11% on the day. 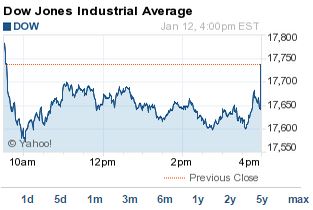 What Moved the Markets Today: The S&P 500 energy index fell 2.8% Monday after Goldman Sachs Group Inc. (NYSE: GS) slashed its oil forecast for 2015. The bank cut its WTI-NYMEX 2015 crude forecast to $47.15 a barrel, down from $73.75 a barrel. It also forecast Brent crude prices to settle at $50.40 a barrel, down from $83.75 a barrel. The forecast piggy-backed news that billionaire Saudi Prince Alwaleed bin Talal said in an interview with FOX Business that crude oil prices will never top $100 per barrel ever again.