As an analyst known for making bold and unusual predictions in pursuit of profits, I am usually inclined to celebrate when my "calls" are proven right.

But when it comes to the proliferation of one of the six primary trillion-dollar trends we're following - War, Terrorism, and Ugliness - I've got to be completely honest. There are times when I am uncomfortable with the human cost of being right.

That's certainly the case right now, following the horrific assassinations of 10 journalists and two police officers last week at the Charlie Hebdo magazine offices in Paris. In case you somehow missed the news, the killings were allegedly carried out by two brothers who had become radicalized Muslims in the Parisian ghettos of Gennevilliers acting in response to cartoons portraying the prophet Muhammad. 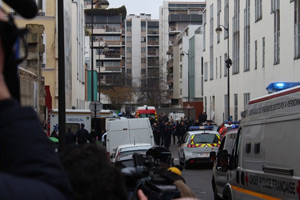 The events in Paris reinforce a very important financial relationship that escapes 99% of all observers - the counterintuitive nature of terrorism and what it means for your money.

And that's what we're going to talk about today. This won't be an easy conversation to have, but it's vitally important because most people get the nature of what we're about to discuss completely backwards, and that leaves their investments vulnerable.

You see, in one of the great ironies of the financial world, terrorism actually creates far more opportunity than it destroys.

There's an Upside for Your Money in This Awful Terrorism Trend

Conventional wisdom is that terrorism has a negative impact on your money.

To hear the media and even most analysts tell it, the uncertainty and terror caused by the threat of violence only diminishes investment opportunities and wider economic prospects. Insurance companies are expected to lose money, for example. Airline and transport companies will see a drop in passenger and cargo mile revenue. Urban areas will see a drop in tax revenue because of the perceived greater vulnerability in a densely populated area.

Certainly terrorists want you to believe that's the case as they advance their own cause, whether that be political, religious, or ideological.

Their stated goal is to inflict maximum damage and uncertainty, resulting in the perception that doing something will result in a disproportionate harm - like getting on an airplane, visiting Times Square, watching "The Interview," or producing satirical content that is perceived as an insult to a religious figure.

In reality, the effect is quite the opposite.

“You see, in one of the great ironies of the financial world, terrorism actually creates far more opportunity than it destroys.” It is unfortunate that this is so, Keith! However, if the goal of terrorists is to weaken and destroy, then they would have failed miserably since it strengthens and builds the wealth of that economy over time.

It is up to us – especially small business owners who are the backbone of an economy, to heed your findings and take advantage of these opportunities or stay in the place of deep emotional turmoil and empathy and let them pass us by. Thanks for sharing!

Just a thought:
Who benefits most from terrorism? Could these people be the force that drives terrorism?