The Dow Jones today rallied nearly 300 points in early trading hours before reversing and finishing down 27 points. The downturn was fueled by Brent crude prices falling another 1% on the day. Crude oil prices are down nearly 15% over the last two weeks.

The CBOE Volatility Index (VIX), the market's fear gauge, was up 4.9% on the day. 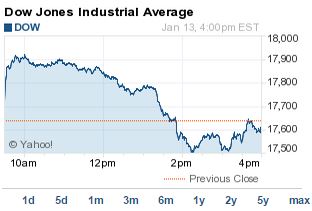 Now, here's a look at the other top stories from the stock market today: