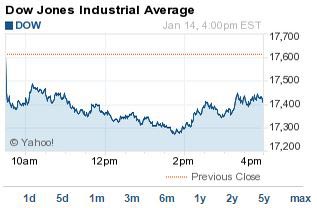 The Dow Jones and the S&P 500 both declined for the fourth-consecutive trading session. The Dow plunged 186 points as retail sales hit an 11-month low and oil prices swung significantly.

The markets are still reacting to yesterday's announcement by the World Bank that it slashed its global growth outlook to 3% for 2015. That's down from the 3.4% forecast in the fall.

The CBOE Volatility Index (VIX), the market's fear gauge, jumped another 4.9% on the day.

What Moved the Markets Today: A steep decline in retail sales renewed concerns about global economic growth, while the basic materials sector fell roughly 2.4% on the day. The S&P 500 energy index rallied back after falling nearly 2.2% at one point during the day. Oil prices surged in the afternoon more than 4%. Early in the trading session Brent crude oil prices hit $46.19, trading near parity with WTI oil prices as OPEC's leading producer nations refuse to slash production and forfeit market share. However, Brent prices surged 4.1% to settle near $48.50 per barrel, and WTI prices jumped 5% to hit $48.21.