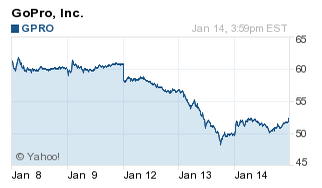 GoPro stock was a disaster waiting to happen, even before an Apple Inc. (Nasdaq: AAPL) patent for a remote control camera went public yesterday (Tuesday).

That's because despite its cool technology, GoPro Inc. (Nasdaq: GPRO) faced an array of threats.

"GoPro's got big problems ahead of it - just like every camera company before it - and that means the company isn't worth what many think it is," Money Morning Chief Investment Strategist Keith Fitz-Gerald said last summer. "To borrow a [Warren] Buffett term, GPRO doesn't have a defensible 'moat,' is facing mounting competition, and has no real brand loyalty."

I love gopro products… Have you seen their your tube channel? Have you been on a travel tour lately? Everyone and their mother has a gopro

Yea,
Remember when everyone had a cabbage patch doll or a trapper keeper or a tickle me elmo doll? It is called a fad and goes away.

or remember when everyone got netflix dvds in the mail, or used google as a search engine, or used MS products for windows and office, or drank redbull because it was everywhere, or bought a tsla because electric cars were new?

GoPro is a brand that's making a name for itself in all things extreme. It's not a fad. it's becoming ubiquitous with adventure and extreme.

That's assuming GoPro can expand beyond its current camera business, as NFLX did, or grow that business to mammoth proportions, as GOOG and MSFT did with the businesses you mention. The problem I see is that it's too easy for competitors to horn in on GoPro's business.