The Dow Jones Industrial Average (DJIA) and the S&P 500 both declined for the fifth consecutive trading session Thursday, while one of the most shocking currency decisions in recent history hammered global equity markets. 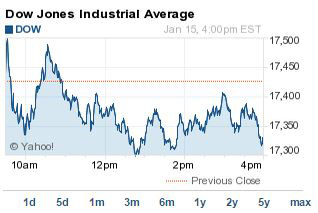 The Swiss National Bank abandoned its current economic policy that prevents the euro/Swiss franc exchange rate from falling below 1.20.

The Swiss franc surged as much as 39% against the euro and U.S. dollar on the day. The move also pushed gold prices to a four-month high.

CBOE Volatility Index (VIX), the market's fear gauge, jumped another 4.24% on the day.

What Moved the Markets Today: The Swiss National Bank (SNB) stunned the world today when it abandoned its currency policy to prevent significant euro depreciation. The news sent shockwaves across markets and into the boardroom of every macro hedge fund and currency trading office in the world.

On the home front, U.S. data continued to drag on the markets. Initial jobless claims for state unemployment benefits rose by 19,000 to a seasonally adjusted 316,000 for last week. This is a steep increase over economist expectations. Meanwhile, Brent crude oil prices slipped more than 2%, falling to $47.68 per barrel, while West Texas Intermediate oil prices slipped nearly 4.2% on the day to hit $46.46.