While everyone's been fixated on oil, renewable energy has been gathering some serious steam.

In fact, spending on renewable energy was so strong in 2014, some have begun to label the recent rush into renewables as a "turning point" in the energy balance.

According to a report last week from Bloomberg New Energy Finance (BNEF), the total invested in renewable power jumped to $310 billion, just $17 billion shy of the all-time record in 2011.

But here's the real kicker...

Since renewable energy is now much cheaper to generate, last year's investment brought in almost double the clean electricity capacity versus what was realized only four years earlier. 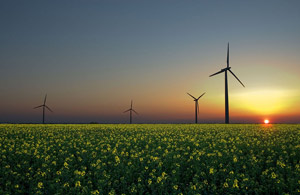 Of course, these figures don't tell the whole story about renewables.

For one thing, the global renewable picture is very uneven. While new projects have moved forward in the Middle East and certain parts of Asia, the biggest move has been largely spearheaded by solar power investment in the United States and China.

Meanwhile, had it not been for some large-scale offshore wind farms in Europe, investment there would have been in negative territory. And in Australia, where there had been signs of a major initiative, lack of government support has resulted in an absolute contraction in support for renewables.

But as the British newspaper The Guardian noted on Friday, BNEF Chairman Michael Liebreich said, "The investment bounce back in 2014 exceeded our expectations," adding, "Solar was the biggest single contributor, thanks to the huge improvements in its cost-competitiveness over the last five years."

In all, solar investment rose by 25%, while wind power rose 11% to account for a third of all investment in 2014. Meanwhile, energy efficiency and electric vehicles rose 10%, including the $2.3 billion raised by Tesla Motors Inc. (Nasdaq: TSLA). On the downside, biofuels investments fell 7% and biomass and incinerator projects attracted 10% less financing.

However, one thing is perfectly clear:

Is there a Mutual Fund that invests in renewable energy?

Of the total invested in renewable energy, how much has been provided by the government, tax breaks, and government subsidies? And how much of that investment has gone "missing" and/or resulted in bankrupt companies?

I would like some research on walk/bicycle/live work facilities like
universities so you do no consume any oil or gas and less demand. I
did this in the Navy and we had high productivity for each man.
Then telecommuting like we are doing now ( you all have seen
a football, baseball, or basketball game on t.v.) to reduce energy
consumption, and mass transit. Look at the energy saving with BART,
and LA Metro. If you want to invest in something that has leverage,
try the underground Wilshire line in Los Angeles.