The Dow Jones and the S&P 500 both reversed course after five consecutive losing sessions. The Dow added 190 points as optimism on rising consumer confidence offset worries about the meltdown happening in the Forex markets over Switzerland's surprise currency announcement yesterday.

The CBOE Volatility Index (VIX), the market's fear gauge, slipped 6.4% on the day. 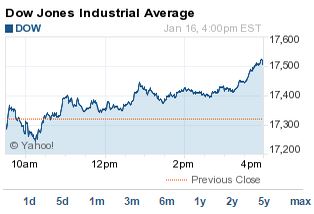