We talk about why you should always be in the stock market (and NOT for the same reasons Wall Street wants you in, either). That's because being in the markets allows you tap into the inevitable growth that comes from capitalism and, by implication, humanity's upside.

Lately, though, people are beginning to doubt the premise behind that Total Wealth tactic.

That's due partly to recent trading action (which is unsettling), and partly due to the hype surrounding various indicators that are almost "guaranteed" to show a looming meltdown (which is unnerving). 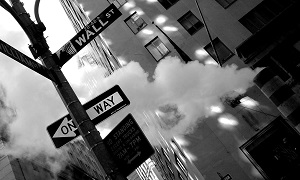 According to the New York Stock Exchange, investors have borrowed more than $457 billion against their brokerage accounts as of November 2014 - a new record. The social meme - the mantra, if you will - is that so much debt is unsustainable, and that it potentially undermines the entire market.

I get that... debt is a four-letter word after all, especially when it comes to the central bankers and Wall Street fat cats. But this is different.

In fact, I'd even go so far as to chalk this up to another case of "it isn't what it seems."

Here's the truth about this "meltdown" indicator.

Putting $457 Billion of Debt into Context

Total margin debt isn't a statistic that's calculated out of thin air. In that sense, it's really nothing new.

Every New York Stock Exchange Member Firm is required to report total outstanding borrowing held against client accounts on a monthly basis and has been since passage of the SEC's rule 606 in 2005. That way, the exchanges and regulatory agencies can track potential exposure and liquidity problems by determining who is leveraged up to their eyeballs and who is not.

This is important because it is the brokers and ultimately the financial intermediaries who will have to make good on any default. You could argue that lately this risk has been shifted onto the American public and I wouldn't disagree - but let's save that for another time.

The thinking is that margin debt goes up because investors are becoming more aggressive and using that money to buy additional securities. That somehow it's an irrational acceptance of risk or complacency.

In reality, though, there's nothing unusual about margin levels that have risen to where they are today. I'd even go so far as to say that while it's imprudent, it's not illogical. When money costs nothing, people are going to borrow as much as they can. And you can thank the Fed for that little gem, via its zero-interest-rate policies.

I know the chart below looks scary but, again, everything is not what it seems...

this is a typical article by a long term investor, all things cycle, what is left out is the lemming effect short term, enough talk, and it is assumed true, as the passengers rush from a "perceived" sinking, they in effect,, cause the sinking by the sudden shift to the other side of the ship. It has happened every time a politician opens his/her mouth, and now everyone is becoming stupid and irrational, thats why most of the lemmings end up in the sea, but there may be no lifeboat on this run, everyone sinks…..just my perspective

bc
Reply to  don koontz

Keith,
Thank you for your explanation. It was a well thought out article. Keep up the good work.

When you realize that "capitalism" no longer exists, you will realize that the stock market is the last place you need to be for the long hall.

Some of what is stated in this article would hold true if capitalism still existed in the United States, unfortunately it does not. The author supplied "trailing stops" as the solve all to the risk of investing in the market on margin. That is a joke! Just ask someone who was involved in currency trading on the 15th how well their "Trailing Stops" performed for them. When the Swiss Franc was unpegged from the Euro things moved so fast that the stops failed to function at all and that can happen in any market. Many people went from riches to rags and several brokerage firms collapsed entirely. The author is obviously too young to know anything about 1929 but we could easily face a similar situation in the near future.

How many times have you filed for bankruptcy?

That may be all good and reassuring but investors are up against two inescapable facts. One is that cheap money has caused speculative bubbles all over the place. Two, there is always a cycle to the market. One needs to be very careful, mindful and thorough in any investment decision made in this environment