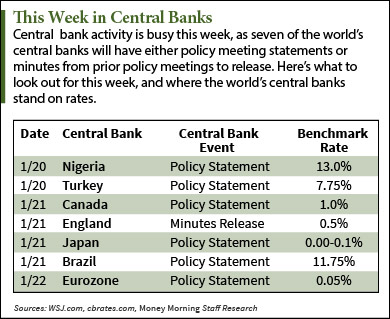 The world will be awash in central bank meetings this week. Global authorities on monetary policy are gearing up for what promises to be a crucial moment in central banking history.

Seven central banks will release policy statements or minutes, as shown in the chart to the right.

Today (Tuesday) the Central Bank of the Republic of Turkey and the Central Bank of Nigeria kicked things off. Contrary to what Western economies have been doing, these two emerging economies mulled cuts to high interest rates. Turkey cuts its rate to 7.75% from 8.25%. Nigeria held steady at 13%.

The week will round out with central bank meetings of the more accommodative Bank of Japan and European Central Bank.

Here's what you should be watching for this week...

Japan is still fighting deflation. The struggle has gone on for about 20 years now. Organisation for Economic Co-Operation and Development (OECD) data shows prices fell by 0.4% in November.

The Bank of Japan is going to stick to its 2% inflation target. In an October meeting, the BOJ announced it was accelerating its bond-buying program. The original quantitative easing in Japan had the BOJ buying government bonds at a pace of 60 trillion to 70 trillion yen a year ($505.6 billion to $590 billion). The October announcement upped that figure by 10 trillion yen ($83.4 billion).

There will likely be no big surprises on the bond-buying front.

Several news reports did suggest the BOJ may take some new action, however. This will likely come in the form of an extension of certain bank lending incentive programs set to expire in March. The two programs include the Growth-Support Funding Facility and the Stimulating Bank Lending Facility.

The efficacy of Japan's monetary policy regime is still very much unproven. Rates are already extremely low. The average overnight call rate is 0.077%, according to the most recent data from the BOJ. It's hard to grasp how effective an extension would be.

Accommodative policies have done little to lift Japan out of its economic malaise. More of the same is not the answer.

Inflation will only come once consumers and businesses are borrowing and spending. Loan demand is still rather low, according to data from the BOJ released in October.

Without an uptick in the velocity of money, you can be sure the Bank of Japan's efforts will bear no fruit.

But the BOJ's monetary policy actions this week are expected to bring little surprises. In the big picture of global central banking, the spotlight will be on the ECB.