Investors are asking if deflation in 2015 is a real concern.

The answer is, at this point, a convincing yes. A confluence of market factors point to this harsh economic reality.

But Americans aren't as familiar with deflation as they are with inflation. Few were even alive the last time America experienced deflation.

"There has been no episode of persistent deflation in the United States since the period from 1927 to 1933," notes author and CIA economist James G. Rickards in his book, The Death of Money.

But deflation is typically worse than inflation.

In a deflationary period, prices will drop, corporate profits will dry up, wages will shrink, and all of this will reinforce the conditions of recessions. This happens for two reasons.

The first is that deflation keeps money on the sidelines as consumers wait for prices to fall further. This causes demand to shrink.

Deflation also adds to the real value of debt. This makes consumers and businesses less likely to take out loans and make big purchases to grow the U.S.'s consumption-driven economy.

And deflation runs counter to the goals of most of the world's central banks. Most notably, the U.S. Federal Reserve.

But as we start 2015, deflation has arrived. Just check out these four deflation indicator charts... 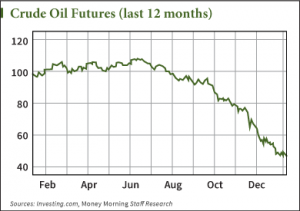 The accompanying chart shows the punishment that crude oil prices have endured over the last 12 months. As of yesterday's close (Tuesday) of $46.47, crude oil has fallen 51% in that time.

Crude oil futures have been trading near lows not seen since April 2009. And since peaking in June 2014, prices have fallen 56%.

It is true that the consumer has enjoyed paying less at the pump.

Not everyone realizes that this is a symptom of deflation. Falling oil prices and deflation go hand in hand. One of the biggest problems with widespread, economy-wide deflation is that it hammers GDP growth. As mentioned before, when consumers expect falling prices in the future, they hold off consumption in the near-term, and economic activity is subdued.

"They could use it to pay off debt - pay off credit card cards, pay off their kids' student loans, pay down a mortgage, etc.," Rickards said on RT's "Boom Bust" last month. "There's an alternative to spending which is saving."

In other words, consumers could be deleveraging. The U.S. is still weighed down by private sector debt. When more money goes to paying down debt, as opposed to spending, that feeds into deflationary pressures. Deleveraging stifles consumption, which will in turn hold back GDP growth. We see this in Japan.

Falling oil prices create the same phenomenon in a smaller - albeit, very important- segment of the economy. 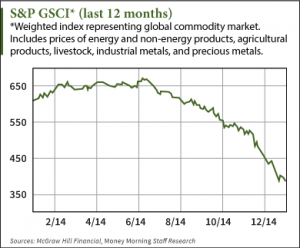 Commodity prices are a good signal of inflationary - and deflationary - pressures. Inflation is often defined by economists as "too many dollars chasing too few goods."

But the accompanying chart of the S&P GSCI commodity price index suggests this is not the case. Too few dollars are "chasing" commodities, and it's putting downward pressure on prices.

Here's a quick rundown of the major commodities price movements since the end of 2013 (excluding crude oil):

Commodities are falling across the board, from food to energy to metals. Such a broad array of commodities taking a dive together suggests weakening consumer demand.

Which brings us to the next deflation indicator...

Don't you know it is time for a Global RESET of ALL currency. NO more fiat money. GRRRRR