The Dow Jones today rose 39 points ahead of tomorrow's critical announcement by the European Central Bank on its stimulus plans. But the Dow's gains were capped by a decline in International Business Machines Corp. (NYSE: IBM) stock.

The CBOE Volatility Index (VIX), the market's fear gauge, slipped 5% on the day. 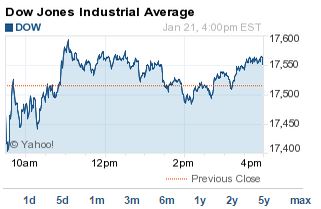 What Moved the Markets Today: Investors are preparing for tomorrow's announcement from the ECB over whether its leaders will employ a massive bond-purchasing program to stimulate the struggling economic bloc. European investors dumped Eurozone bonds today ahead of the central bank's announcement and moved money into 10-year Treasury bonds. This afternoon, gold prices snapped a seven-day winning streak. The yellow metal was unable to defend its first increase above $1,300 per ounce since August. Meanwhile, the Canadian "Loonie" hit a six-year low against the U.S. dollar as falling oil prices continue to hit the commodity-rich nation.