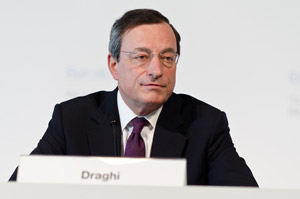 The Dow Jones Industrial Average (DJIA) reversed early losses on Tuesday to finish the day up three points. Gold prices jumped more than 1% on Tuesday, hitting a five-month high. Growing concern over global currencies and expectations for a pending stimulus program at the European Central Bank are pushing investors back into metals.

Last week's Swiss National Bank shock taught us two important lessons, but today investors will focus on a critical announcement set for tomorrow from the European Central Bank. Thursday, the ECB is expected to announce its own massive bond-purchasing program to stimulate the currency bloc's dragging markets. Concerns about deflation and falling oil prices have compounded. However, if the ECB balks and shocks the market like the Swiss Bank did, we could see significant volatility in the short term.

Money Morning Tip of the Day:  U.S. auto sales were up big in 2014 and are expected to stay strong in 2015.Oil prices have collapsed and are expected to stay low, fueling demand for pickup trucks, SUVs and RVs... Indeed, signs of a boom time for the American auto industry appear aligned, but auto stocks are trading at depressed values compared to the rest of the market. Are auto stocks ripe to buy, or are they simply a value trap? Here's the real answer.
Join the conversation. Click here to jump to comments…