Not only has venture capital investing in Bitcoin failed to slow even as the price of the digital currency has slumped, but now some big Wall Street names have hopped on the bandwagon.

On Tuesday Bitcoin payments and wallet platform Coinbase announced it had raised $75 million in Series C funding. That's more than double the previous amount of venture capital invested in a Bitcoin company. San Francisco-based Coinbase has now raised a total of $106 million.

But this time it wasn't just the usual Bitcoin-friendly VC firms backing Coinbase. 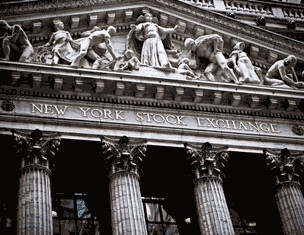 "With this investment, we are tapping into a new asset class by teaming up with a leading platform that is bringing transparency, security, and confidence to an important growth market," NYSE president Tom Farley said in a statement.

"Investors still have a pretty high conviction on Bitcoin despite what the spot price of Bitcoin is doing," Fred Ehrsam, a Coinbase cofounder, told The New York Times. "This really is people putting their money where their mouth is in terms of betting on Bitcoin as a technology trend."

Why the Top Dogs of Finance Are Investing in Bitcoin

That this new interest from conventional investors comes after a 67% decline in the Bitcoin price last year speaks volumes. They recognize that the real value of Bitcoin isn't the price on any given day, but the technology it's built upon.

That's also why so many tech-oriented venture capital firms have been investing in Bitcoin for more than two years.

Most of the VC firms in the latest Coinbase round, in fact, are no strangers to investing in Bitcoin. They include Andreessen Horowitz, Draper Fisher Jurvetson, Ribbit Capital, and Crypto Currency Partners.

They must see tremendous potential in Bitcoin to dump millions of dollars into cryptocurrency startups. And now traditional investors are seeing that potential, too.

But impressive as it is, Wall Street's sudden desire to invest in Bitcoin is only one sign of bigger things to come for Bitcoin in 2015...