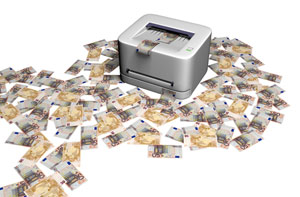 So, to help make sense of this, we drilled down exactly how Eurozone QE works.

The program is expected to last from March 2015 to September 2016. This means Eurozone QE will expand the central bank's balance sheet by about 1.1 trillion euros ($1.29 trillion) over the next year and a half. Draghi suggested that it may, however, be open-ended, as the main aim is to bring inflation back up to around 2%.

Inflation in the last month was negative 0.2%. The Eurozone is in deflation. And deflation kills demand. It reinforces recessions by forcing down wages and pushing up unemployment. It also adds to the real value of debt - the last thing the Eurozone's debt-ridden periphery needs right now.

While QE has been employed in the United States, the U.K., and Japan, it's important to understand that Eurozone QE is very different.

But before diving into that, you'll want to understand why countries are driven to QE in the first place...

The Rationale Behind Quantitative Easing

The situation that many economies have been in since the financial crisis has been referred to by economist Richard Koo as a "balance sheet recession."

In a balance sheet recession, consumers and businesses are deleveraging. Deleveraging leads to deflation. When facing a financial crisis and shouldering heavy debt loads, the private sector will begin to pay off that debt and save more. This will cause consumption to fall, and prices will fall as a result.

Deleveraging also cuts into the number of private sector borrowers. Consumers and businesses aren't going to take out loans when they are trying to pay down debt. That leaves money markets and financial institutions awash with funds from the new deluge of savers and the sudden lack of borrowers. This reinforces deflation.

The only borrower left in that situation is the public sector. Institutional investors will take those savings and park them in super-safe, low-interest U.S. Treasuries. The government will then use that money to fuel government spending and push up GDP.

That's where QE comes in. The U.S. Federal Reserve will buy up U.S. government bonds as well. This will put more money into the banking system and push rates even lower, so as to give the federal government more "fiscal space" to borrow and spend at lower rates.

QE is essentially a mechanism that gives the government more room to spend with less strain on budgets.

But it doesn't work the same way in the Eurozone.

Why the Eurozone QE and U.S. QE Are Different