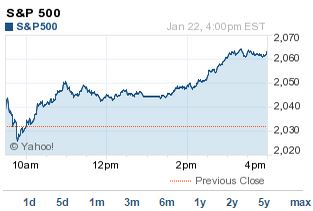 The S&P 500 and other major benchmarks soared today on news the European Central Bank (ECB) has launched a massive bond-purchasing program. The U.S. dollar hit an 11-year high against the euro on the news.

What Moved the Markets Today: Investors were shocked to hear the ECB's stimulus package will clock in at 60 billion euros a month, up from the 50 billion euros a month many had anticipated. The bank also said it will keep interest rates unchanged. But investors did have reason to remain cautious about the U.S. economy. Jobless claims continue to tick upward. For the third straight week, Americans seeking unemployment benefits exceeded 300,000. A number of corporations like American Express Co. (NYSE: AXP), Baker Hughes Inc. (NYSE: BHI), and Halliburton Co. (NYSE: HAL) have all announced steep layoffs heading into 2015.

Now, check out the other top stories from the stock market today: