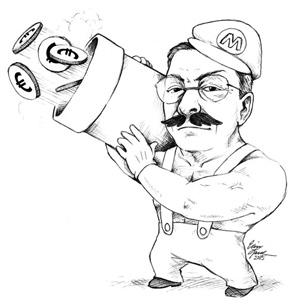 What Is Draghi's QE?

"Super Mario" Draghi will be shooting 60 billion euros ($68.1 billion) a month into the economy. That's ten billion more euros a month than anticipated. By September 2016, more than 1.1 trillion euros ($1.29 trillion) will have been created by the ECB's QE.

"The combined monthly purchases of public and private sector securities will amount to 60 billion euros," Draghi told a news conference. "They are intended to be carried out until end-September 2016 and will in any case be conducted until we see a sustained adjustment in the path of inflation."

Market Crash Protection: Gold continues to be the best crisis hedge investment - but only if you know how to avoid buying fakes. Gold counterfeiters are busier than ever looking for their next victim. Here are the seven best ways to tell if your gold is the real deal.

Why Did Draghi Decide on This Form of QE?

The ECB QE should attack the Eurozone's painfully low inflation rate. In December, annual inflation came in at -0.2%.

"Inflation dynamics have continued to be weaker than expected," Draghi said. "While the sharp fall in oil prices over recent months remains the dominant factor driving current headline inflation, the potential for second-round effects on wage and price-setting has increased and could adversely affect medium-term price developments."

How Will Draghi's QE Work?

The ECB will buy euro-denominated investment-grade securities only. That means countries like Greece that present risk problems due to their bailout status must meet "additional eligibility criteria."

Additionally, debt trading with a negative yield is eligible for the ECB QE program.

While a majority of risk will remain with Eurozone national central banks, 20% of additional purchases are subject to risk-sharing arrangements. The idea there is to limit the amount of risk the ECB takes on. Debt issue purchases are also limited (no more than 25%) for the same reason. The maturities of the debt purchases will range between two and 30 years.

Profit from EU Struggles in 2015: Greece's economic troubles are nearly insurmountable. Compared to its Eurozone compatriots, Greek GDP fell further while others recovered - six years after its financial crisis, the Greek economy is still only 75% of its former 2008 size. You can target Greek woes and Draghi's ECB QE with this investment...