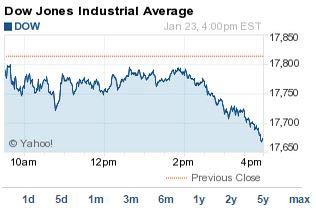 Crude oil prices continued to fall, pulling down energy and materials stocks in the process. West Texas Intermediate slipped nearly 2% on the day, with the price per barrel settling at $45.59. Materials stocks were the biggest losers on the day led by steep declines in shares of mining and resource companies.

What Moved the Markets Today: Investor optimism about the European Central Bank's plans to inject 60 billion euros a month into the markets was offset by weak economic data and disappointing earnings results from several major multinational firms. In the United States, the Markit manufacturing purchasing managers' index slipped again in January to 53.7 from 53.9 in December. This is the index's lowest level in a year and raises concerns about the American private sector as the year kicks off.