The DJIA dipped Monday due to concerns regarding the weekend's election in Greece but ended the choppy session with a modest gain. Greek voters elected its anti-austerity party into office, and new concerns have emerged about the country potentially departing the euro. 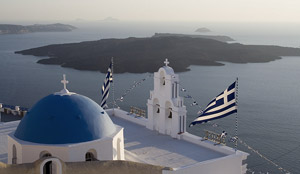 What Moved the Markets Today: On Sunday, the anti-austerity Syriza party in Greece won 149 out of a 300 possible seats in Parliament. But it was hardly a surprise to investors, as the election results were largely priced in ahead of time. With the euro continuing to slide in the face of a massive bond-purchasing program from the European Central Bank, the economic bloc is expected to see a boost in manufacturing and exports thanks to a weakening currency.

[Extra: With New York bracing for a potentially historic snowstorm Tuesday, many wonder: Does the NYSE close for snow? Here's the answer...]