[This story was updated Tuesday, Jan. 27, 2015] New York Stock Exchange weather-related closures are rare. Indeed, even with New York declaring a state of emergency today (Tuesday), it was business as usual for the NYSE.

Even with blizzard warnings remaining in effect for large swaths of the Empire State, and the Big Apple bought to a standstill, the NYSE opened for trading. 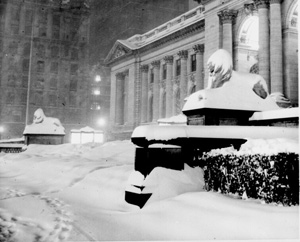 "This could be a storm the likes of which we have never seen before," New York City Mayor Bill de Blasio cautioned Sunday at a news conference.

However, the NYSE opened on time Tuesday and made it clear the Floor would be open all day. Volume will likely be light with only a skeleton crew available for banks and brokerages across the tri-state region.

The last time weather forced the Big Board to close was in October 2012, when Hurricane Sandy ravaged the east coast. The NYSE closed on Monday, Oct. 29 and Tuesday, Oct. 30, 2012. It was the storied exchange's first two-day, weather-related shutdown in 124 years.

It also marked the first time in 27 years (since Hurricane Gloria in 1985) that the Big Board closed for an entire day due to weather conditions.

Snow, however, is the most common cause of NYSE weather-related closures. Just take a look at how many times it has disrupted trading...

Free Book: The secrets in this book helped one reader make a $185,253 profit in just eight days. Learn how to claim your copy here…

When Snow Has Shuttered the NYSE

March 12-13, 1888: The Great Blizzard of 1888 forced the NYSE to close for two days. One of America's most severe recorded blizzards ever, some 60 inches of snowfall blanketed parts of New Jersey, New York, Massachusetts, and Connecticut on that Monday and Tuesday. Sustained winds greater than 45 mph created snowdrifts 50-plus feet high. More than 400 people lost their lives in the storm. Some 200 of those deaths were in NYC.

Jan. 3, 1948: The year started off with harsh weather cutting a frozen swath from Texas to the Eastern seaboard. The massive Saturday storm dropped mountains of snow on NYC, downed power lines and caused icy roads. The NYSE, which was open on Saturdays until Sept. 29, 1952, closed for the day.

Feb. 10-11, 1969: The NYSE was closed all day Monday, Feb. 10, and opened at 11 a.m. Tuesday, Feb. 11, after 15.3 inches carpeted NYC. The snowsquall was given the moniker the "Lindsay Storm." Then Mayor John Lindsay took some serious heat after sections of NYC went unplowed for a week.

Jan. 20, 1978: This Friday snowstorm resulted in the NYSE calling for a delayed noon opening.

With the secrets you’ll find in this book, Technical Trading Specialist D.R. Barton has produced 89 chances to double, triple, and even quadruple your money in the past two and a half years – 42 chances this year alone!