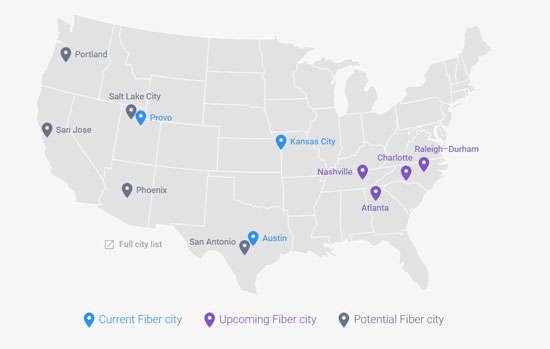 That's cause for celebration for those lucky denizens...

In fact, customer satisfaction ranking in the ISP industry currently falls below the health insurance industry and airlines.

Google Fiber is a welcome alternative to ISP customers. And so far, the service has glowing reviews...

Google has been rolling out its high-performance optic cables in U.S. cities since 2011. So far, Google Fiber is live in Kansas City, Kan., Austin, Texas, and Provo, Utah.

For roughly $120 a month, customers get Internet that's as much as 100 times faster than other ISP services, plus TV service and DVR. Internet service alone costs roughly $70 a month. And Google Fiber reviews have been overwhelmingly positive so far.

"These are amazing services at unbelievable prices," Slate tech columnist Farhad Manjoo wrote in 2013 when he explored Fiber in Kansas City. "For about the same fee that many Americans currently pay for cable, Google is offering Internet speeds that, until now, were available only to big companies for thousands of dollars a month."

Special Report: The 7 Best Tech Stocks for 2015 - All the ingredients are now present for a multiyear run in tech stocks that will dwarf anything we've seen before - creating a slew of new tech millionaires. Tech expert Michael Robinson's 2015 Tech Investor's Forecast gives readers seven tech picks that could create Alibaba-like wealth this year. Download it here for free...

In February 2014, GOOG announced it would explore 34 more cities for Fiber rollout. Some of these include Atlanta, Phoenix, Salt Lake City, San Antonio, Nashville, Portland, and more.

Here's a shot of the expansion map on Google's fiber site taken in November 2014 (two months prior to today's news and the updated map shown above): 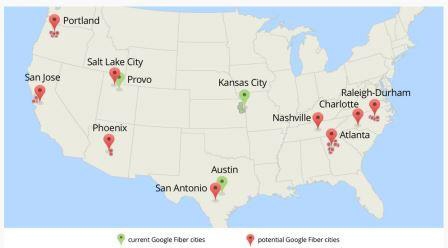 The rough expansion plans were finally firmed today (Tuesday). The Wall Street Journal reports Google will announce the launch in coming days, according to two people familiar with the situation.

According to local reports, Google sent invitations to local news organizations in the four chosen cities to attend events this week. The invitations did not identify the topic. Atlanta and Nashville events are scheduled for Tuesday, Raleigh and Charlotte on Wednesday, and Durham on Thursday.

Stay tuned to www.MoneyMorning.com for the latest news on Google Inc. and its revolutionary Google Fiber project.

Why We Love GOOG: Google Fiber is just one reason the Internet giant is a great investment. Google (Nasdaq: GOOG) is about to offer mobile service plans that will shake up top dogs AT&T and Verizon - and give customers another much-needed option...