Today is a good day to remind ourselves that we should always be in the stock market (especially tech stocks).

The markets remain the single best place to tap into the ongoing innovations in technology and the relentless growth that they create. And there are strategies we have at our disposal that we can use to safely capture some of that growth – and the wealth we all desire.

Today we're going to head to the heart of the global auto industry to use Rule No. 3 – "Ride the unstoppable trends."

And once we arrive at our destination, I'll show you the best way to profit from the technology that is fueling the ongoing auto sales boom… 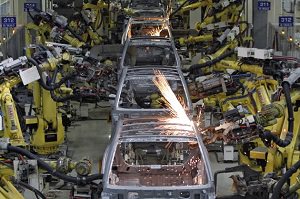 I hope you don't still think of the Motor City as the home base of the global auto industry.

As a former auto analyst who was based in Detroit in the early 1980s – and as a longtime "GM guy" – it hurts to say that.

And it's not in Japan or Germany or South Korea, either.

And the advanced technology embedded in today's vehicles is among the biggest driver for sales of new cars and trucks. With the average car on the road at 11.4 years old, many folks are feeling a bit of "backup camera envy" – and they're heading to their local dealers with open checkbooks.

Cars and trucks are running better and lasting longer than ever before, and so automakers find themselves with a marketing challenge. And car manufacturers are getting us to buy more often by adding Wi-Fi-connected infotainment units, in-dash GPS navigation systems, and backup cameras.

Essentially, they've turned their vehicles into $30,000 gadgets, "smart cars" that consumers will feel the need to upgrade more regularly than every decade or so – making this an unstoppable trend.

And that makes Silicon Valley the real capital of the global auto industry.