The Dow Jones today gained 225 points. What fueled the surge? Strong earnings reports from a number of Blue Chip companies and an upswing in oil prices. Brent crude oil for March closed up 1.4% to $49.13. 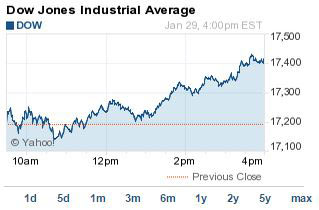 The S&P 500 Volatility Index (VIX), the market's fear gauge, slipped more than 8% on the day.
What Moved the Markets Today: The good news started today before trading opened. Job cuts slipped to 15-year lows last week, a positive sign for the U.S. employment situation. Only 265,000 Americans filed for unemployment compensation last week, according to the U.S. Labor Department.

Now, check out the other top market stories - plus get today's new profit tip for investors:

Money Morning's Tip of the Day: We Are Entering a Brand-New Age for Renewable Energy - One with Record-High Profit Potential...

Texas wind energy has grown 70.97% in the past five years. Wind was responsible for 10.6% of power generation in the state grid last year, up from 6.2% in 2009. Going further back, wind farms composed just 116 megawatts of capacity on the state's main electric grid in 2000. Today, that number has soared to more than 11,000 megawatts.

Since renewable energy is now much cheaper to generate, last year's investment brought in almost double the clean electricity capacity versus what was realized only four years earlier. That's undoubtedly a bullish sign... so we'll keep you informed on opportunities in this sector.

Moors already alerted readers to some big developments in the sector in these columns last week: The Renewable Energy Market Gives Us a License to "Grow" Money and Solar Power Is at a Tipping Point... and the Upshot Is Massive Profits.