President Barack Obama has promised a Keystone pipeline veto. Soon he'll get his chance to do it. 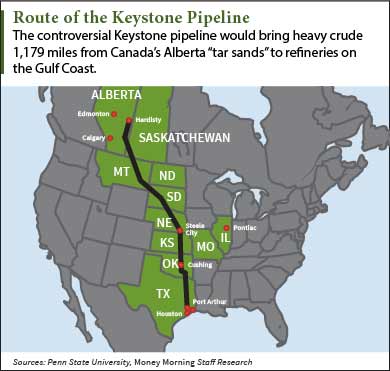 The Keystone XL pipeline would bring heavy crude 1,179 miles from Canada's Alberta "tar sands" to refineries on the Gulf Coast. Many companies would benefit from the Keystone project, as we noted in November.

But other companies are rooting for a Keystone pipeline veto from President Obama. A veto would delay Keystone indefinitely, forcing Canadian oil producers to use alternatives.

Since winning the Senate in the November elections, it was clear the Republicans could get a Keystone bill through Congress. Whether the GOP can muster the 67 votes needed to override a Keystone pipeline veto, though, is a different story.

President Obama could change his mind and offer to trade approval of the Keystone XL pipeline for some climate change concessions. But a Keystone pipeline veto seems where we're headed.

A veto wouldn't kill the Keystone pipeline. But further delays would make it less likely to be built.

The approval process has already dragged on for six years. In November the company behind the Keystone XL pipeline, TransCanada Corp. (NYSE: TRP), said the cost of the project had swelled from the original estimate of $5.4 billion to $8 billion.

And the added delay would give companies that offer alternatives to Keystone - other pipelines, railroads, and tanker barges - a major boost.

Such companies already are transporting Canadian tar sands oil that would have run through a completed Keystone pipeline.

"That oil is already moving to market and it's found alternative ways to get there," TransCanada CEO Russ Girling said on FOX Business Jan. 19. "We can get it onto a pipe, get it to the coast, put it onto a barge and get it to the Gulf Coast that way. Either rail or barge doesn't require a presidential permit."

The oil has continued to move despite the big drop in oil prices, which Girling believes will rebound eventually.

A Keystone pipeline veto will give these companies a lot more business...

Companies that stand to benefit from a Keystone pipeline veto by President Obama fall into three categories: alternative pipelines, railroads, and oil shipping by tanker and barge.

We've found the best stocks in each industry. Take a look:

I think the Canadian Sands companies have pulled one of the great coups in our financial history. When the "Greenies" figure out that the Tar Sands will get to the refineries without XL they will panic, cringe, endure the egg on face posture and realize that the XL for the time being is a distraction. Greenies are stupid.