Microsoft stock has been a favorite of Money Morning Capital Wave Strategist Shah Gilani and Money Morning Defense & Tech Specialist Michael Robinson for more than a year. And this week Money Morning Special Contributor Michael Lewitt, a Wall Street and hedge fund veteran, weighed in with a strong defense of MSFT stock.

Microsoft Corp.: About the Company

Microsoft Corp. was founded by Bill Gates and Paul Allen in Albuquerque, N.M., on April 4, 1975. Microsoft started out making versions of the BASIC programming language for early PCs. Microsoft moved to Bellevue, Wash., in 1979 and to its current headquarters in Redmond, Wash., in 1986. Microsoft's road to domination of the PC industry started when it made a deal with International Business Machines Corp. (NYSE: IBM) in 1981. Microsoft licensed the DOS operating system to IBM but retained the rights to the software. When PC clones emerged, Microsoft sold MS-DOS to all of them, creating a virtual monopoly. MS-DOS set the stage for Windows, which today runs about 90% of the world's PCs. In 1989 Microsoft introduced Office, which soon became the standard suite of business software. Over the years the company has developed a wide range of tech products and services for both consumers and businesses. Today MSFT employs 122,935 people worldwide. It has a market cap of $344 billion.

Microsoft Stock: Why It's Oversold 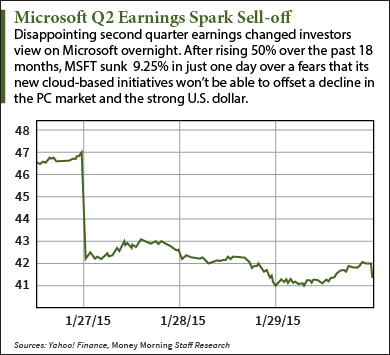 For the past 18 months, investors had been in love with Microsoft stock, pushing it up by 50%. Much of that enthusiasm arose from departure of Chief Executive Officer Steve Ballmer and the arrival in February 2014 of new CEO Satya Nadella. His "mobile-first, cloud-first" strategy seemed just the tonic for a decade of stagnant MSFT stock performance. Until this past Monday, at least. That's when Microsoft reported its second quarter earnings after the market close. They were mostly in line with expectations, although revenue just missed. Slumping PC sales pulled down the Windows division, and foreign exchange issues with strong U.S. dollar ate into revenue. And Microsoft warned these problems would persist for much of 2015. That sent Microsoft stock down 9.25% on Tuesday. For the week, MSFT stock is down more than 13%. Investors are worried that Nadella's strategy isn't ramping up fast enough to replace declining revenue from the company's legacy businesses.

But selling Microsoft stock now is a big mistake...