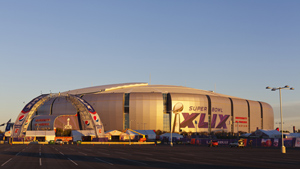 Superstitious investors will be rooting for the Seattle Seahawks to defeat the New England Patriots in Super Bowl XLIX on Sunday, Feb.1.

That's because the "Super Bowl Indicator" tells us a Seahawks victory will propel the markets higher in 2015.

This might sound absurd, but the Super Bowl Indicator is strangely accurate… In fact, it's been right more than 80% of the time.

The Super Bowl Indicator was created in 1978 when a New York Times article showed the correlation between Super Bowl champion and market performance. Originally, the indicator stated that if an original NFL team won the Super Bowl, a bull market would occur that year. If an original AFL team won, there'd be a bear market.

The Super Bowl Indicator has been altered since its conception in 1978. Through the 1970s and 1980s, the NFL vs. AFL lines were followed strictly. But numerous division realignments and expansion teams have blurred the lines.

The Super Bowl Indicator also has an 80% success rate over the past five years:

The Indicator has a pretty accurate track record in the Patriots' three Super Bowl victories as well. Two of New England's three wins have been followed by down years for the markets.

The Patriots won the Super Bowl again in 2004, and that year the Dow performed better, up 4.4%. That year the indicator was wrong.

Of course, we suggest putting more research into your investments than simply waiting to see who hoists the Lombardi Trophy. But if the Seahawks win and the market ends higher for 2015, that's yet another winning year for the Super Bowl Indicator.

Make 2015 Your Wealthiest Year Yet: Get in the best financial shape of your life with this guide to money making in 2015. You'll get the three bad investing habits to dump immediately, the single most effective strategy to maximize returns, and five stocks to get started on the road to wealth…