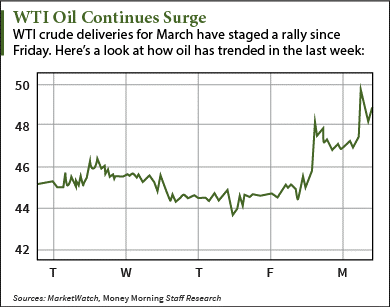 Why Oil Prices Are Up Today

The strike threatens to disrupt as much as 64% of total U.S. fuel output.

The union brought 36 issues to the table covering a wide range of demands. They include annual pay raises double the size of those in the previous contract, a policy to stop workplace fatigue, and reductions in out-of-pocket healthcare payments.

Make 2015 Your Wealthiest Year Yet: Turn 2015 into your most profitable year yet by simply employing a good investing strategy. That means avoiding these three mistakes and pursuing these five stocks – all of which will guarantee huge returns…

"The problem is that oil companies are too greedy to make a positive change in the workplace," said Tom Conway, the USW international vice president of administration, to TIME. "They continue to value production and profit over health and safety, workers, and the community."

Morgan Stanley (NYSE: MS) analysts disagree. According to The Wall Street Journal, the bank said any near-term oil rally would be bearish for the second half of 2015. Higher prices would prevent the type of investment cuts required for long-term balance.

But Money Morning's Global Energy Strategist Dr. Kent Moors says that "crude has the ability to quickly self-correct." Plus, the oil supply glut story is completely overblown. Demand is set to climb to 93.5 million barrels a day in 2015 and will outpace supply. Get the truth about oil prices in 2015 here – you'll also get two companies that will profit as oil M&A spikes…

How does union strike = price increase? I don't understand a trader's philosophy on this?