The Dow Jones erased a 100-point gain Wednesday to end the day just 6 points higher than where it started. What happened? Investors turned cautious as oil prices fell once again. 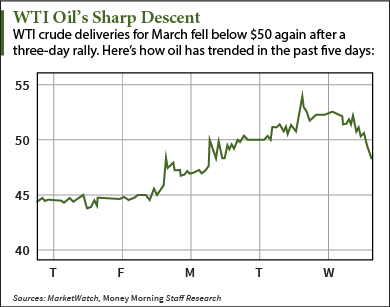 The S&P 500 and Nasdaq were negative today on falling energy prices and declines in the biotech sector.

West Texas Intermediate prices fell more than 8% this afternoon on news that crude oil inventories rose by another 6.3 million barrels last week, according to the Energy Information Administration.

The S&P 500 Volatility Index (VIX), the market's fear gauge, rose more than 5% on the day.
What Moved the Markets Today: A $6.3 billion merger between two office retailer giants led the headlines on a mixed day of trading. Staples Inc. (Nasdaq: SPLS) will take over Office Depot Inc. (Nasdaq: ODP) in a cash-and-stock deal, which is expected to receive little regulatory resistance.

Falling crude oil prices drove down energy stocks during the day, while shares of Gilead Sciences Inc. (Nasdaq: GILD) cratered more than 8% after the company reported mixed results for the fourth quarter.

Money Morning Tip of the Day: To become wealthy, you have to learn to ignore "the noise" and focus on "the signal." It's the hardest but most important part of investing.

I often advise investors to "Separate the Signal from the Noise." To create real wealth, you have to ignore Wall Street's hype machine ("the noise") and instead focus on firms with excellent fundamentals ("the signal").

The noise is hard to ignore – it's everywhere. But it can lead you down the path to investment destruction. And most retail investors succumb… which is what Wall Street wants to happen.

Take Apple Inc. (Nasdaq: AAPL), for example. Apple reported the biggest quarterly profit ever for a public company on Jan. 27. Now, instead of looking at the picture clearly, the media is making Apple shareholders worry that smartphones have reached their peak – and Wall Street seems to think the company has become too dependent on iPhone sales.

All that "concern" from the media and Wall Street is "noise." But here's the "signal": Apple will continue to grow beyond iPhone sales thanks to catalysts in at least three sectors. And that'll propel the Apple stock price even higher.

Go here to find out more about the AAPL price catalysts – the ones Wall Street doesn't want you to know – plus get all of our latest tech stock picks.