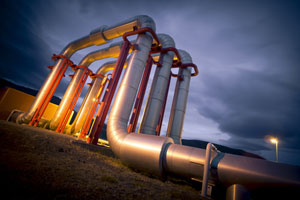 Today will be another busy day of earnings reports, but investors should be keeping an eye on the January private payroll employment growth from Automatic Data Processing, two days ahead of the latest U.S. unemployment report.

Despite rosy projections about employment in the United States, yesterday the polling firm Gallup's CEO Jim Clifton wrote a scathing editorial on his company's site that shamed U.S. data collectors for lying about the official unemployment rate, which currently sits at 5.6%. In the editorial titled "The Big Lie," Clifton explained that his company's research indicates that just 44% of Americans have a full-time job with an organization that pays 30 hours a week. He explained the tricks and bogus calculations used by the U.S. Department of Labor to massage its data and mislead Americans. Gallup projects the real unemployment rate has increased 1% since December.

Money Morning Tip of the Day: To become wealthy, you have to learn to ignore "the noise" and focus on "the signal." It's the hardest but most important part of investing.Today's tip comes from Money Morning Tech Expert Michael A. Robinson:

I often advise investors to "Separate the Signal from the Noise." To create real wealth, you have to ignore Wall Street's hype machine ("the noise") and instead focus on firms with excellent fundamentals ("the signal").

The noise is hard to ignore – it's everywhere. But it can lead you down the path to investment destruction. And most retail investors succumb… which is what Wall Street wants to happen.

Take Apple Inc. (Nasdaq: AAPL), for example. Apple reported the biggest quarterly profit ever for a public company on Jan. 27. Now, instead of looking at the picture clearly, the media is making Apple shareholders worry that smartphones have reached their peak – and Wall Street seems to think the company has become too dependent on iPhone sales.

All that "concern" from the media and Wall Street is "noise." But here's the "signal": Apple will continue to grow beyond iPhone sales thanks to catalysts in at least three sectors. And that'll propel the Apple stock price even higher.

Go here to find out more about the AAPL price catalysts – the ones Wall Street doesn't want you to know – plus get all of our latest tech stock picks.