I'm not an alarmist.

The sky isn't falling. But the same may not be true for stocks.

And I am concerned. To see what I'm talking about, just take a look at the stock charts below. Take a good look at each one.

See if you see anything in them. See if you can see what I see.

Then I'll tell you what I see and what I'm afraid of...

Do You See What I See? 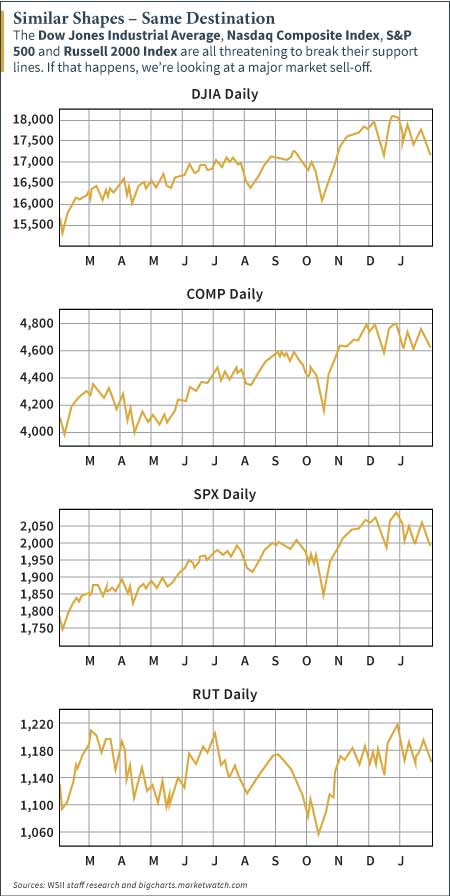 They're all different market indexes. They all look the same. Don't they?

And they're not the only indexes that look this way - check out the Dow Jones Transportation Average and the PHLX Semiconductor Index as well.

Not only do they look the same, but they're all pointing to the same place - a danger zone.

On every graph, on the right-hand side, after the big drop in October, you can draw a pretty straight line under the dips on the right from the middle of December to now.

What is that line? That's "support." Every one of those charts and most individual stock charts look like these indexes. They all have the same support line.

If they break that support line - if just enough of them break their support lines - they're all going down.

The correlation is frightening.

That's what I'm worried about.

A major market sell-off can happen. We're at that point - we're hanging on to support.

Then again, support can be support. And we could bounce higher and make new highs.

When I wrote this heading into the markets' close on Feb. 2, 2015, after being down triple digits that morning, we went up triple digits.

So far, so good. Support levels are still holding.

However, I'm more concerned about preserving my capital than risking it at this juncture.

Here's what I suggest you do...

I just want to stop and take a moment to say I appreciate your work. (Wish I had taken a path more similar to yours-I spent way to many years in grad and law school before realizing my first love was the market.) You are one of the only people in the financial media who seems to know what's going on with the government and the market and you don't get caught up in the BS or hesitate to call a spade a spade and ID the fubar system for what it is.